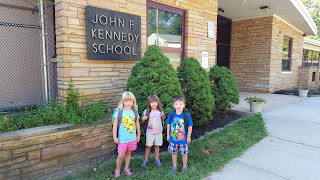 It's amazing to think that Amelia, Tony and Olivia are old enough to be going to school!  Our town offers a free half day Pre-K program so we signed them up!  The day before they were to start, we did a trial run - yes I actually made them get up early on a Sunday, get dressed, eat breakfast, put on their backpacks and get out the door and walk to school.  I took this picture since I knew I likely wouldn't have time on the actual first day of school or I'd be too emotional and forget.

Here are some pictures from the real first day... 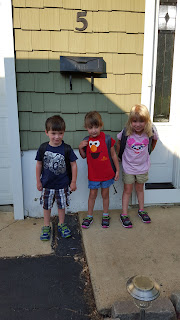 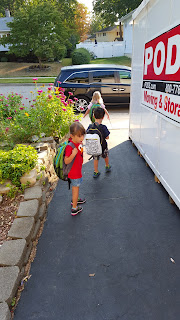 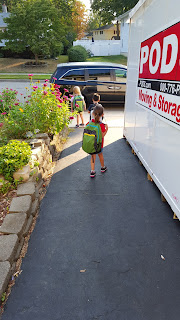 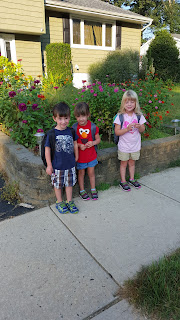 I walked them to school the first few days and I know that I cried on at least once.  They didn't cry at all but I did as they walked right in to the building and didn't look back - not a wave, not a glance, nothing.  It made me feel like they didn't need me but I guess that's what we've been prepping them for the whole summer.  The first day, it seems as though they drilled their teacher's name into their heads - Mrs. Sanger.  I remember on either their second or third day going in, there was a teacher standing in the doorway and they would ask everyone who their teacher was so they knew which way to direct them.  When the three of them walked in right after one another and each said the same name, the teacher thought they were mistaken.  I let her know that they were triplets and they all had the same teacher.  It was funny to me!

Posted by The Triplets of Fernwood at 11:31 PM No comments:

A few final moments from the month of August include a trip to the ENT for all of the kids.  The kids each had speech/language evaluations.  Being an Audiologist, I wanted to check out their skills to make sure everyone was doing ok.  For the most part, everyone was ok, but it was recommended that they see an ENT for high palates and to make sure their 'airways' were open based on some of the findings of the speech eval.  I went to Coastal ENT - where a colleague of mine used to work.  They have great ENTs and great Audiologists.  Everything was fine - but the one child that I had the least amount of concern about - little Tony - ended up having an ear infection!  This is a picture of them waiting in the waiting room! 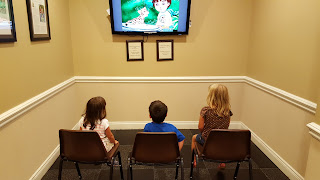 In August, the kids also started swim lessons.  It was through a service that rents out the pools at local hotels.  I tried getting to most of the lessons, but it was right after work and it took a while to get there.  I didn't think alot about the first teacher, until they had a substitute for the next two classes.  The second teacher was so much better with the kids, but after those two classes, their lessons were over.  We actually signed up for lessons again, but this time it was a completely different teacher at a different hotel.  This teacher they had the longest amount of time, but I didn't care for her because I felt she only yelled at the kids - I know they're young and don't have a great attention span, but I felt she didn't know how to work with younger kids that well.  We signed up for a third session and most of those teachers were good, but each teacher seemed to only last about 2-3 classes and then they were gone for some reason or another.  Olivia is actually quite a good swimmer and Amelia and Tony - they try, but just aren't as big or strong as Olivia.  This is a picture from our dinner out after swim lessons - our favorite ended up being Olive Garden - we had the same waitress a few times who was great with the kids. 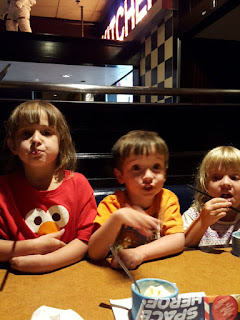 Finally, I decided to try and sell off the cloth diapers that we used with the kids.  I was able to find two different facebook groups just the Best Bottom - the brand we used.  People buying and selling covers and inserts, etc.  What I didn't realize is how much people spend on cloth diapers.  Let me explain - the Best Bottom brand (after we were all done with cloth) started coming out with 'limited edition' covers.  Usually for holiday - really cute covers, but limited meant limited and people were searching far and wide and willing to spend over $100 for a cover that someone else's kid literally pooped and pee'd in/on.  I don't get it, but to each their own.  I was able to sell all of the covers and inserts for a few bucks a piece.  We ended up making back a few hundred dollars.  Not too bad for some used diapers! 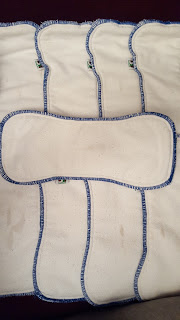 Posted by The Triplets of Fernwood at 12:15 AM No comments:

Other happenings in August (Sesame Place)

August was a busy month but we made time to eat!  During one of our weekend errand trips, we were driving past Tom + Chee and decided to give it a try. We're fans of the TV show Shark Tank so we knew about the place and who doesn't like grilled cheese?  I honestly can't remember the food but it must not have been that great since we haven't been back there but I don't remember it being bad.  I think it seemed a bit pricey especially with the kids in tow.
They were offering free t-shirts if you posted a selfie along with your sandwich.  So of course we did and got 3 t-shirts! 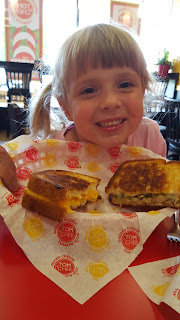 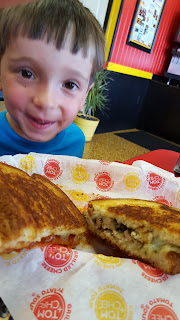 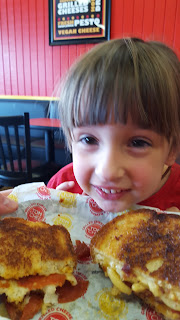 Other random pictures - I made waffles! and we're going out to run some errands - Aren't we cute? 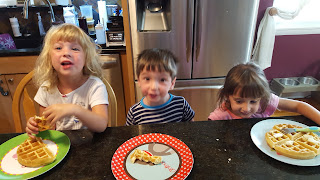 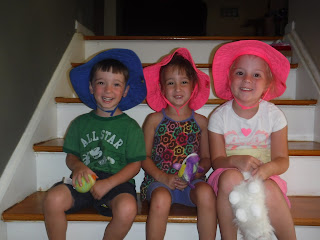 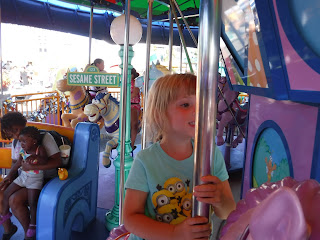 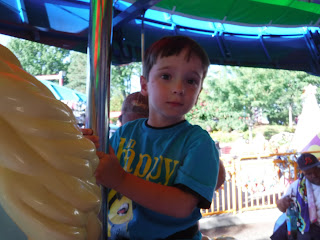 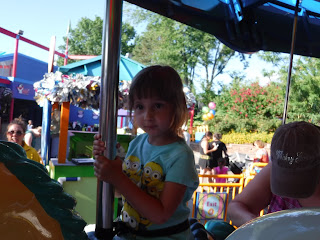 Tony's mom got the kids tickets for Sesame Place for their birthday gift and we wasted no time in using the tickets.  It was a weekend and a really busy day so the lines were long but we still had fun.  We did a few waterslides-including the family one.  Olivia was actually big enough (and brave enough) to go on her own.  This is where she differs from me - I would have never done that on my own at 4 years old! There was a big waterslide that Tony took the kids on - I tried - got all the way to the top and I chickened out.  I had to make the walk of shame all the way down the stairs with Amelia.  She was started crying cause she wanted to go but I just couldn't do it.  I felt so bad for her but she did eventually get to go.  Tony went about 9 times!  We did have one scare of Olivia getting lost for about about 2 minutes but we found her.  You'd think that with three adults and three kids we could keep track of each of them but it happened.  We got a bunch of pictures of the kids with the different characters - some we knew and some we didn't!  The parade was fun and the kids even met a few other kids who told them that we should come back for Halloween.  They had all of their costumes planned out.  They were going to be the Scooby Doo gang.  It was so cute to see them find other friends.  It was a tiring, hot day and I'm sure they were asleep by the time we got underway.  Our passes included a second trip - stay tuned for our second trip!
Posted by The Triplets of Fernwood at 10:58 PM No comments: