T & I went out for dinner last night to celebrate his birthday.  We went to Steakhouse 85 and had great steak.  It's not a place either of us had been to before nor will likely again any time soon because it wasn't cheap, but it feels good to 'treat' ourselves once in a while.  I had asked T's mom if she and my FIL could watch the babies and had also asked one of our neighbors - Beth to help out in case my FIL couldn't come.  Well, it ended up that neither my MIL or FIL came, but Beth and her daughter came over right on time.  All went well and we were told upon our arriving home that all babies were 'angels'.  We only had one hiccup though and believe it or not Olivia woke up around 11pm crying.  After about a half an hour we tried feeding her a few ounces and noticed that her diaper was on super tight.  I really think she was uncomfortable because the diaper was too tight.  After eating two ounces and loosening up her dipe, she calmed down and fell asleep.  If I didn't mention is, this past week we've introduced another new food - applesauce! Olivia and little T seem to like it, but Amelia doesn't seem to care for it.  Here's a video that is so cute of them eating :)
Oh well... i tried to upload it, but it's not working now... i'll try again tomorrow!

Posted by The Triplets of Fernwood at 11:11 PM No comments:

I don't get to post very often, but feel impelled to write an update every now and then.  I just finished my third week on the new job and feeling good about the decision.  Everyone seems so nice and happy with their job there.  The best part is that I already have a great friend there - James - who I worked with previously.  It makes things a bit easier seeing a friendly face every day.  I also seem to 'fit in' well with the other audiologists and have already started exchanging things with one of them who has an 8 month old baby.  She brought in a cute outfit and some formula samples and I gave her some coupons.  Today we even bonded over our common back pain.  The only reason I know is that she had a book on her desk about 'healing your own back pain' that was written by Robin McKenzie and it just so happens that my sister is credentialed in the McKenzie way/style of PT!  Too bad she doesn't live closer, she would already have several patients to treat.
As for T, he seems to be doing really well lately.  I think he's got his routine down and for the most part, everyone stays on schedule.  Our morning starts between 6 - 7am with the baby alarm going off.  It's normally Olivia, but sometimes Amelia will be the first to wake up.  Everyone gets fed and diapers changed and gets back to bed by 7:45am.  During that time I'm also getting ready for work.  I'm usually out the door by 8am - 8:15am.  From what I understand, they usually take a little nap and then go downstairs around 9am.  Earlier this week, they started getting a little bit of oatmeal - only about a tablespoon each.  He sits them up in the bumbos and gives them each a tiny bit on the tip of the spoon and goes in order... some for Olivia, some for little T, and some for Amelia, and then he starts over!  Olivia is the best eater, then little T and little Amelia tends to push it back out of her mouth the most, but with everything else, she'll get there! 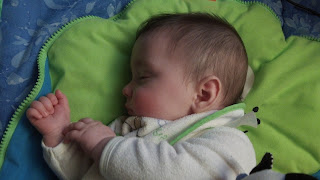 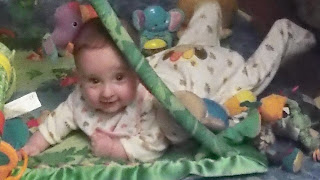 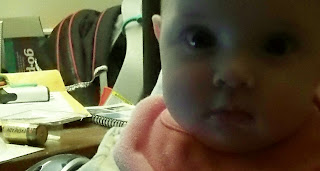 They get another bottle around 11am, more oatmeal around 1pm, another bottle at 3pm, more oatmeal round 5pm and their last bottle at 7pm.  After that feeding, we put them to bed!  They usually sleep through the night.  I say 'usually' because the past two nights little T and/or Amelia has woken up early - like midnight or 4am.  I really need to get to bed earlier, but just can't seem to wind down enough to go to bed before 10 - 11pm.  I'm glad it's Friday and I have good intentions to try and sleep in tomorrow, but we'll see if it actually happens.  I'll likely feel impelled to get up earlier and clean.  Oh and the reason for the title is that I, along with the babies, had oatmeal today!  Here's a few pictures from tonight or this week.
Posted by The Triplets of Fernwood at 11:08 PM No comments:

For the third day in a row, I come home to babies crying and T about to lose his mind.  I understand and I don't know how he hasn't lost it before now.  Triplets are no joke - it's hard work!  Monday and Tuesday it was because Little T didn't want to eat - and it seemed like Amelia was picking up some of her brother's bad habits.  He'll start off eating really well, eating about 4 oz (out of 6), but then he just won't eat the rest and screams and flails around.  Sometimes he'll start eating again after a minute or two, but sometimes not.  Today when I got home, I walk in the door and Olivia was crying in the swing and T was bleeding.  Yes, bleeding.  After a while I understood what had happened, but at first I just got bits and pieces from him as to how it was Olivia's fault that he was injured.  T was making dinner - peeling potatoes in the kitchen and Olivia was laying on the floor in the living room and just started to scream - as if in extreme pain.  Because of the scream, he flinched and took a chunk out of his finger with the peeler.  He had blood on his shirt, on the babies clothes, on one of the rockers, etc.  All is fine now and the bleeding finally stopped.  We actually got to eat our dinner while it was hot and babies all ate well with no 'flailing' and are currently in their cribs sleeping.  T and the dog are also sleeping as I'm writing this and waiting for the washing machine to finish.
We're waiting for grandma and grandpa (far away) to come this weekend.  I can't wait!  :)
Here's a few pictures I took when I got home tonight. 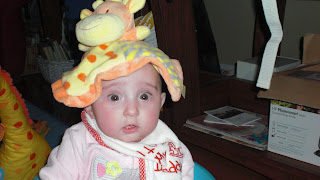 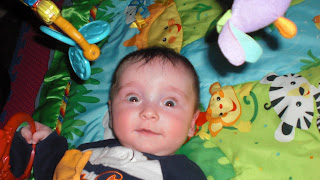 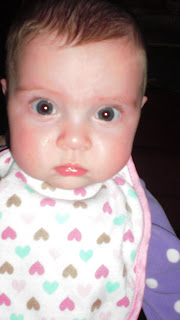 Posted by The Triplets of Fernwood at 10:45 PM No comments:

I haven't updated in a while, so I thought I'd jot down a few things that are 'going on' on Fernwood.  The babies have all been sleeping through the night.  We typically feed them around 7pm and they sleep until 5 or 6am.  We just started them on some rice cereal in their bottles.  They had a little yesterday and a little more today and so far so good!  Everyone is eating 6 ounces including Amelia (previously known as our 'pokey' baby.
This morning Amelia and Olivia were the first to wake up and after they were done eating they spent some time "talking" to each other.  This is my favorite thing about having more than one baby - so far, at least - watching them interact with each other.  Sometimes they catch a glimpse of each other and smile and other times, they look at one another with a puzzled look on their face.  Something else I love is the fact that when I come home or come in the room, I get smiles from everyone.  It's very satisfying that they recognize me and are happy to see me.  Yesterday morning, Olivia and little Tony both had the hiccups.  It was really funny.
Little Tony had a red bumpy rash behind his ears and on his forehead toward the end of last week.  He went to the pediatrician and they basically said it's probably just a dermatitis.  So we're making sure to clean it and using hydrocortisone cream.  It seems to be clearing up.  I'm not sure if I updated, but T ended up bringing the babies into work last week and I found that he had some fluid in the right ear, but the pediatrician dismissed my expertise and said that she didn't see any and my test likely wasn't valid because he has a curvy ear canal.  What?  Anyways, don't get me started about that.  I'll see if I can test him again soon to make sure it's not lingering.
Amelia is rolling over like a champ (from her back to her belly).  She can even get her arm out from underneath her, but then she's on her face and eventually gets annoyed because she can't get back over.  She's definitely going to be 'daddy's little girl'  She loves her daddy and loves being in the same room with him.  Today she liked sitting in her bumbo on top of the table.  She likes to be entertained too laying on the floor/on one of their many excercise mats.
Olivia is also rolling over, and like her sister, gets herself stuck.  She's a happy baby and slept most of today and is still the best eater.  She's also the most talkative of the bunch and is so cute to watch when she sees her brother and sister. 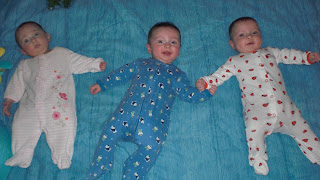 Otherwise, the new year, brings a new job.  I start tomorrow and really looking forward to it but a little nervous too.  I better get a good night's sleep so I can pay attention tomorrow.  :)
Posted by The Triplets of Fernwood at 9:58 PM No comments: