I'm not sure I'm ready for this


As usual, I'm a bit behind in updating on what's been going on, but I'll start with last week when I came home from work to find my babies running around in bathing suits.  T's mom had of course gone shopping for swimwear despite me telling her that we already had some (hand-me-down) suits for the girls.  She wasn't there when I got home, but his dad was and I honestly could not believe what I was seeing.
I'm going to go with "a picture is worth a thousand words" here... so instead of describing it, I'll just post the pictures.

I expressed my concerns with Tony regarding Olivia's bikini and I think he concurs.  He did say something like "Carter's didn't have any more one-piece suits".  The suits aren't even from Carter's - as far as I can tell, she either got them at Sears or on Zulily.  I'm sure some other people may not have an issue with their toddler in a bikini, but I do.  There's no need for a little not-even-two year old girl to be showing that much skin.  I don't plan on putting her back in that suit.  There's plenty of time in the future - way down the road for them to wear a bikini, but not now.
Posted by The Triplets of Fernwood at 12:08 AM No comments:

These words were repeated at least 25 times this afternoon as we had the babies outside in the back yard.   Since the weather has been getting nicer, we try to take them outside for some fresh air and let's face it, tire them out by running around.  Our back yard still needs quite a bit of work since the hurricane passed through and wiped out the two largest trees.  The trees are mostly gone - they're cut up in logs or are in a pile of sawdust from the stump grinder.  The trees left alot more problems though than just wood piles.  As you walk around, there are sticks jabbed into the ground and the area is not necessarily baby/toddler proofed.  So we need to keep an eye on them.  I find myself continuously looking around and counting each one to make sure I have tabs on each one.
Here are a few pictures from the afternoon...


Posted by The Triplets of Fernwood at 12:32 AM No comments:

This was a comment that I heard on Easter... on having multiples.

Let me start from the beginning and preface this by saying that I'm probably a bit over sensitive about the whole subject and taking it the wrong way, but want to get it all out.

So at the end of the afternoon and the Easter festivities were breaking up, a quiet announcement that one the sister's in law is expecting.  She shared that she had some issues early on and was in the hospital where they did an ultrasound and discovered that she was pregnant with twins, but now only pregnant with one.  She mentioned that she was fine and feeling fine and happy to be pregnant... with one.  She indicated that someone else (don't know who) said to her "you really dodged a bullet there" and she concurred with this statement.  I wasn't quite sure what to think of this comment or  how to process it.  What does she think, having twins would be the worst thing in the world?  Do we (Tony & I) make it look that difficult?  I mean sure, I rarely get dressed up or 'do' my hair, but that wasn't uncommon before the babies either.

In talking to a few other people, one made the comment of, if she feels that way about having another child or possibly having two, then maybe they shouldn't be having any more.  Any child is a blessing.  I'm not sure if everyone would agree with me, but struggling with fertility issues and ending up getting pregnant with three and carrying three healthy babies to 35 weeks changed my outlook on a lot of things, including pregnancy and children.
Another explanation of the comment that was given by one my optimistic friends was that Tony and I make it look easy (dealing with multiples) and she didn't think she could ever do as well.  Another said that she likely didn't know how to respond to the comment and didn't even realize what she was agreeing with.

I guess I'd like to believe these two latter explanations and chalk it up to that she didn't realize that she was making an insensitive comment about having multiples to someone who has triplets.
Posted by The Triplets of Fernwood at 7:58 AM 1 comment:

Easter morning started like most other mornings, but we needed to plan for a light breakfast as Tony's family planned a brunch around 11am.  Tony wanted to video-tape them discovering their Easter baskets since this really was the first year that we had baskets for them.  Tony spent some time the night before and morning of getting everything together. 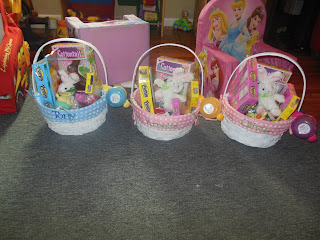 I took the video with the other camera and after several minutes when the camera turned itself off, I realized that I had never even started.  DUH!  Luckily the kids have a very short attention span so we quickly got everything back in the baskets for round two.  We walked them around the kitchen and back into the living room and it was like they hadn't seen anything.  They were just about as excited the second time around.

Around 10am, we started to get them ready in their outfits supplied by Tony's mom.  From what I understand, she bought these outfits quite a while ago, so we're lucky they fit.  Once everyone was dressed, I thought I'd try to get a few pictures of the three of them on the steps.  I thought wrong.  They're in that stage where they understand what you want them to do, and purposely do the opposite - at least Olivia does.  She does all of her naughty work with a sly grin on her face too.
So here's what I ended up getting... 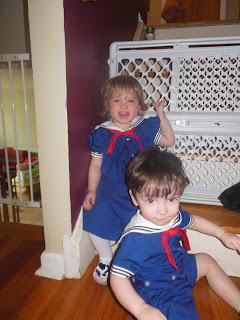 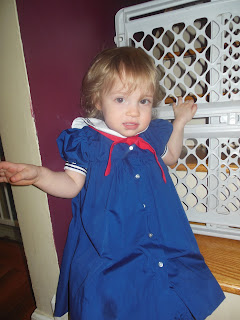 We got over to Tony's parents house, ate brunch and then prepared to go outside for the egg hunt.  Each kid was equipped with a bucket to collect eggs.  It was so fun to watch them.  We had to walk them around and show them what to do, but they each picked up the eggs and put them in the bucket.  Olivia ended up with the most - Six eggs!  Amelia got four and little Tony got three.  He would have had more, but some of the older kids got to the eggs a bit faster even though we saw them first.  Oh well... we didn't need the extra candy in the house.
Here's a few pictures of the hunt! 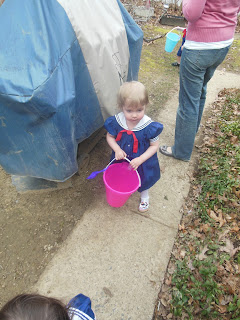 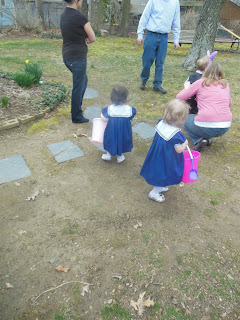 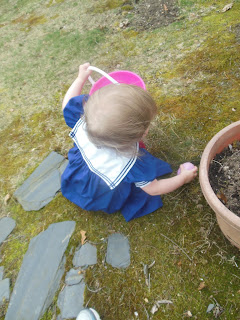 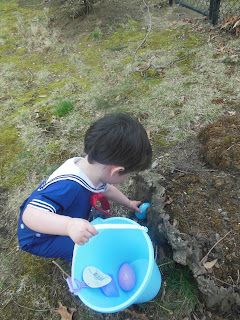 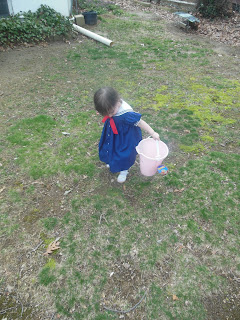 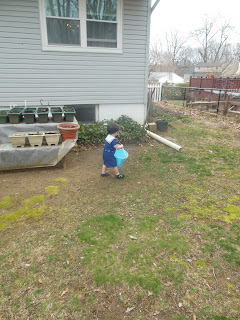 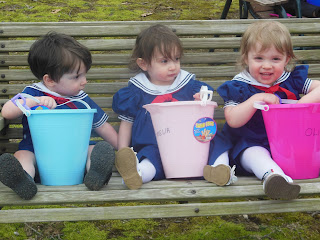 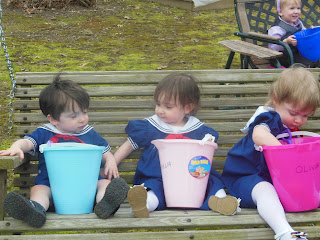 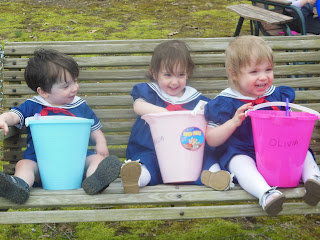 Afterwards, we went back inside and played around.  I was a photographing fool that day - I was snapping pictures of the girls smelling flowers, playing with toys and just about anything! 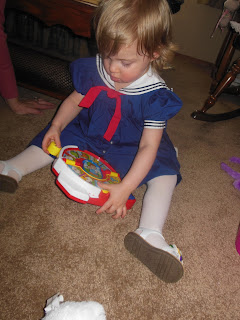 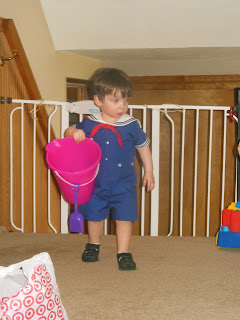 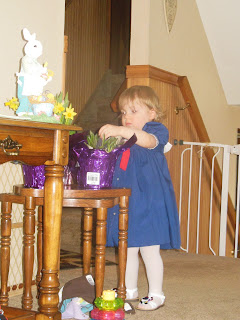 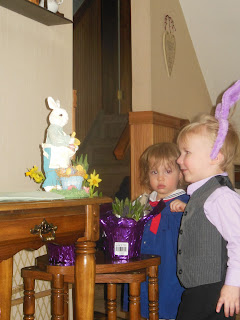 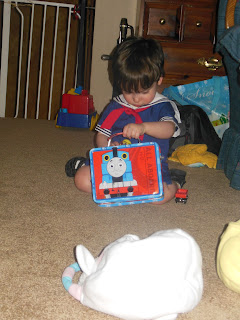 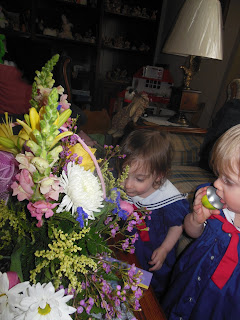 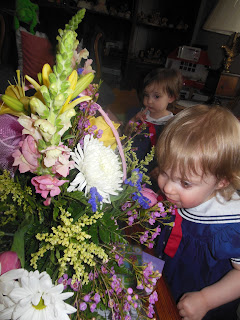 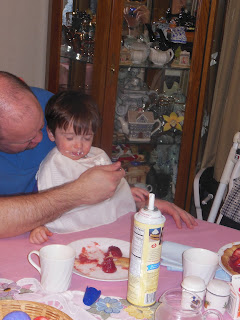 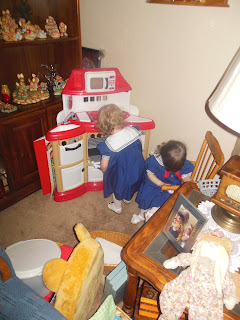 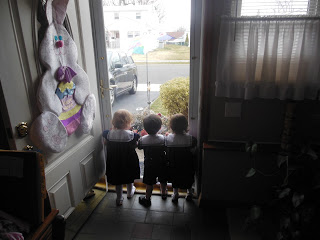 All in all, it was a nice day.

Posted by The Triplets of Fernwood at 11:58 PM No comments: