Fun at the Farm!

My MoM's club had it's Fall picnic at Russo's Farm this past weekend.  I hesitated a while on deciding whether or not to go.  Some said that the kids are too young, but others told me that we'd have fun and the kids would enjoy it.  We ended up going, but knew we'd need at least a third adult to help wrangle the crew!  Tony's parents were up for the challenge so we got up nice and early last Saturday morning, got everyone dressed and ready to go.  It was supposed to be a pretty chilly day so we made sure we brought their winter coats, hats and mittens too!  We arrived (only a little late), but just in time to get on the wagon pulled by a tractor to head out to the pumpkin patch.


They didn't seem to mind the bumpy ride and once we arrived at the pumpkin patch, we let them roam around.  Olivia seemed to like the pumpkins the most, Tony just sat down next to them and camped out and Amelia had a difficult time walking amongst all the vines that were left on the ground. 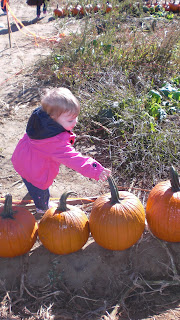 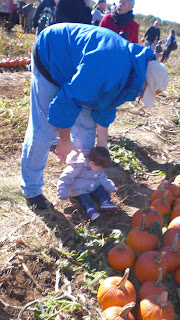 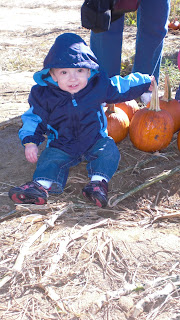 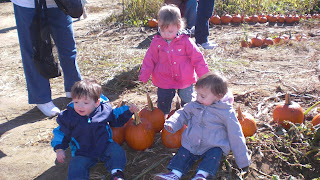 After each baby picked a pumpkin we loaded back onto the wagon to head back to the main area where they had a few other things to do.  They had a huge sand pit with other toys, but I didn't want to start them eating sand at such an early age.  We pulled them around in the metal wagons they had and rode the hay horses.  Little Tony really seemed to like this little car that my friend Nancy's daughter (Anya) was 'driving' 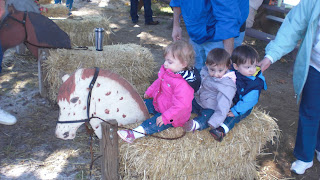 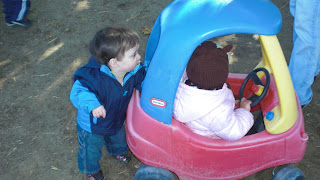 We stayed a little longer and took pictures with my whole MoM's group - we had one little incident - Amelia fell and scraped her head - no blood though!  We did end up with a nice family photo and a few other cute pictures of the trio. 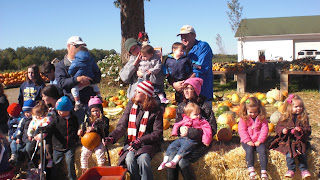 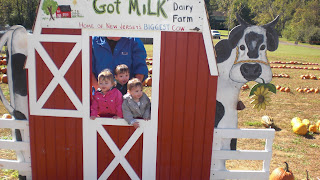 After the farm, we went to Halo Farms for our weekly milk/egg run to pick up our 4 1/2 gallons of milk and 4 dozen eggs.  Everyone was getting a bit hungry after that so we decided to hit the diner and get some lunch.  The babies ate well - and really enjoyed their dessert including little Tony with his chocolate pudding.

A good time was had by all and I'm really glad we went!
Posted by The Triplets of Fernwood at 12:29 AM No comments:

High Five's all around!

A quick update post on everyone... forgive me if I've already mentioned some of these things before.

Everyone is still doing very well.  Everyone is on regular whole milk.  No more formula!  We actually have a few tubs of the regular Similac left and about 18 bottles of the ready to feed Alimentum left over from the other triplet mom that gave it to us.  I've actually posted on the facebook page that if anyone else needs it, that I'd give it to them, but so far no one is interested!  Oh well, I'm sure I'll be able to find someone.
We're so glad that Amelia has overcome her 'milk allergy' and has been doing well with the regular milk and dairy.  Amelia is our only baby that still wants to drink her milk from the bottle.  She'll use the sippy cup for water or juice, but won't drink her milk from one.  I still like feeding her because it gives me a chance to hold her.  Little Tony actually let me hold him tonight while he drank his bottle from his sippy cup :)  Amelia typically drinks about 5 -6 oz and then eats her lunch/dinner.  Olivia and Tony drink about 3 oz, then eat their lunch/dinner and then drink the rest of their 6 oz bottle.  They mostly eat pretty well, but there are some days/nights that they don't each very much.  Tonight they had some keilbasa sausage - surprisingly they all really like it, cheddar cheese, crackers, and brussel sprouts!  Well, Olivia ate brussel sprouts - the other two wanted nothing to do with them!  They also had some grapes and watermelon.

Other than eating, they're all so curious and it's so fun to watch them discover new things.  They walk around the house, always wanting to climb the stairs and are starting to want to climb up on things.  We recently bought one of those pop up tunnels from them to crawl through because T started to notice that they all like to climb under things like the stools in the kitchen and under their play activity table. 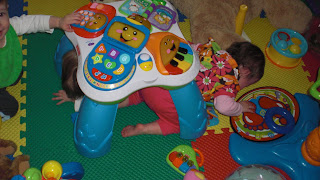 We also purchased each of them a little foam chair.  They climb on them on occasion and will sometimes sit in them.  The one we got little T is a Cars themed one and actually makes noise.  We turned it on the other day and scared the poor little guy.  He was so scared of it, he wouldn't go near it or the other two that are decorated with Disney fairies and Disney princesses!  I felt bad, but it was sort of funny to see him so scared of it.  That probably makes me an evil mommy!  They all are great stair climbers too!  We've been teaching Olivia how to climb back down and I think she's almost ready!  The other two aren't ready to learn. 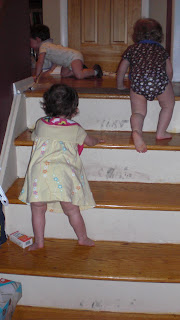 They typically play together well, but on occasion Olivia likes to 'throw her weight around'.  If she sees something that someone else has, she'll go and take it.  Amelia and Tony in the past would usually let it go and not get bothered by it, but lately they try and stand up to her and fight back.  It doesn't always end well thought  - I've actually seen Olivia tackle Tony and basically sit on him!  I've tried to put her in my version of 'time-out'.  I'll separate her - preferably with no toys - for a short time.  She normally gets mad and cries for a minute or so, but she gets over it.


Above is a video where Tony loses his balloon to Olivia and then he tries to come over and steal the book that Amelia is playing with.  The video ends because Amelia is trying to bite Tony's back!  Below is right after - she gets the book back and plays and dances - well her version of dancing.  The first video also has some 'dancing' in it.  I LOVE watching them - so funny and sweet!

On a final note, all babies can give high 5's on command.  They won't always do it, but they can!  I've even gotten Olivia to point to her head, belly and nose.  Again, not consistently, but we'll there!
Posted by The Triplets of Fernwood at 12:31 AM No comments: