Thanks Chuck E Cheese! (not)

Last weekend, we attended a birthday party at Chuck E Cheese.  I had been there in the past for other parties, but not with children of my own - at least not ones running around.  I was pregnant the last time I went - I remember showing my ultra-sound pictures to my family.  Anyways, I didn't recall there being many things/games for little ones (18 months old), but was assured by my mother in law that there were and that it was for only two hours.  Well, my memory served me right - there wasn't really much the kids could do or if they were able to, they didn't want to do.  They had little rides and such, but all except Olivia was scared of them.  We did a few other games, but we had to hold them up in order to play.  They mostly roamed around and watched other people.

Here's a few pictures of them while driving to the party... they look thrilled right? 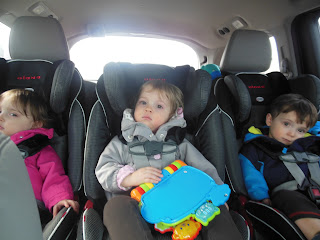 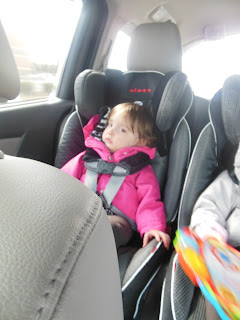 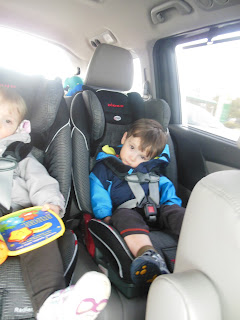 The two hours went by pretty quickly and we ended up going over to BJ's with Tony's parents - I thought that by this point, they would have passed out, but nope, still going strong.  After what seemed like hours in BJ's, we were finally on our way home.  I think they were feeling really tired and giddy but still not falling asleep - nope - they were all trying to eat their shoes - and feet once we removed their sneakers. Hilarious! 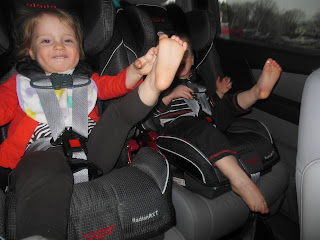 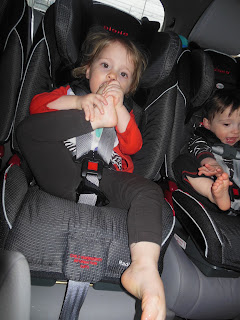 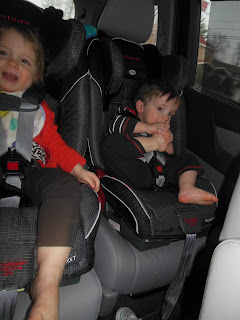 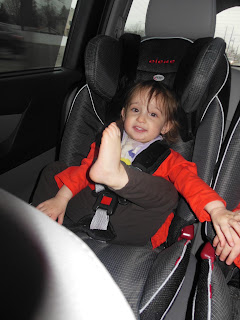 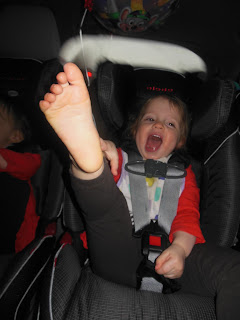 They never did take a nap that day and it all seemed to work.  That brings me to today.  Everyone in the house is sick.  Earlier in the week, little Tony kept falling and hitting his forehead - he had a really big lump on his head and afterwards starting throwing up.  He ended up going to the ER that night because he threw up a few times and didn't have a temperature or seem sick.  They released him after a few hours and a CT scan that came back negative.  They thought that he possibly had a concussion or possibly came in contact with a virus - oh great!
He threw up again on the way to the pediatrician's office - and she thought it was a concussion because at that point, he still didn't seem sick, but Olivia was starting to get a cough.  Well that cough developed into a 102 degree fever and more baby vomit.  I had forgotten how bad they all were when it comes to take medicine.  They HATE it and refuse to swallow the medicine - which in the end makes them gag and throw up.  The sick bug  has developed over the weekend and now everyone is sick including me and Tony.  That basically means sleepless nights for a while until everyone is better.

I don't have sick pictures from today - which was the most miserable day we've all had.  Little Tony is crying as I write this trying to get comfortable and coughing every so often.  I also keep hearing the other two coughing from upstairs.  It's so sad to feel this helpless.  I wish I could take all their pain away right now.

Other pictures from this weekend include everyone wearing this set up bunny slipper/booties.  I found them going through some things getting ready for my MoM sale next weekend.  They're really cute, but a little small for them now, but I had to have them try them on and once one tried, they all wanted to put them on. 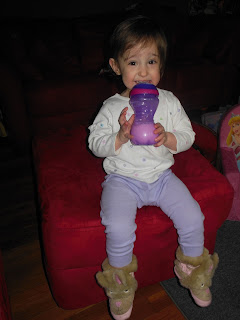 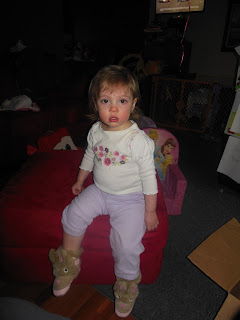 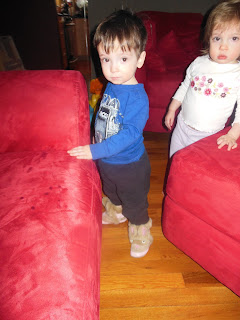 I took this video the other evening while they were eating.  We've been doing a little bit of signing with the babies - and well, one sign in particular has stuck!

Posted by The Triplets of Fernwood at 11:46 AM No comments:

We've been teaching the babies some animal noises.  So far, they all can all do their own version of a dog, duck, lion and cat.  Amelia definitely has her 'meow' down.  They all know that the cat mainly resides in our bedroom and typically hides under the bed.  So every morning and multiple times during the day (if they're upstairs and if you let them, they'll all run into our room and check under the bed for the cat and talk to her if she's there.  It's adorable to watch them, but don't take my word for it...   Here is Amelia talking to the kitty.

Posted by The Triplets of Fernwood at 12:07 AM No comments:

Winter storm Nemo blew threw yesterday/last night and left us with about 6 inches of snow.  I'm not sure when we started 'naming' winter storms, but I'll go with it.  I was told to leave work early when the rain turned to snow and it started to 'stick' to the roads.  My ride home took about twice as long as it normally would - but it wasn't only because of the road conditions - it was mostly because everyone else in the central NJ area decided to leave early too.
The snow let up a bit once I got home and then started back up around 9pm.  I went to bed around 11pm and had the alarm set for 5am so I could get to my weekend gig at Fort Dix.  It ended up that they delayed me arriving due to the snow, but I was up at 5:15am shoveling the driveway and sidewalk.  It wasn't until after that, that I received the text to come in later, so I went back to bed.
The day before, Tony and him mom had gone for the weekly milk/eggs run and also went on sled-quest 2013.  I guess any type of sled was difficult to come by - they went to two different Targets and at least a few Home Depot's and finally found a few.

Up until today, the babies had only ever seen snow - they had never played or walked in it.  Tony had his mom come over to help him out - or to at least make sure no one got into trouble.  Here's a few pictures of their time in our Winter Wonderland. 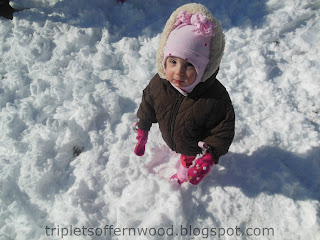 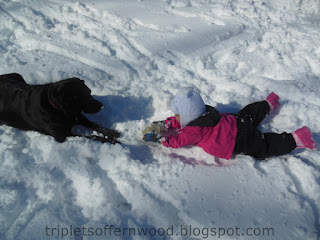 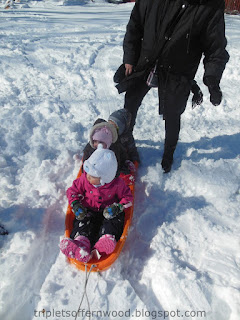 Posted by The Triplets of Fernwood at 11:10 PM No comments:

More of what you missed...

The babies got to meet Santa and Mrs. Claus a few weeks before Christmas.  The Farmer's Market that we go to weekly to get our deli meats, etc. and the one that is across the parking lot from Halo Farm, where we get our 4+ gallons of milk per week had a strolling Santa and Mrs. Claus every Saturday during the month of December.
We dressed the babies up in some matching/coordinating outfits and away we went.  We took them in the stroller and once we found Santa, we unloaded and tried to keep them in one place while trying to get a decent picture of everyone.  Tony didn't really seem to want to help at all, I guess he was more interested in getting his polish meats than getting a picture with Santa, so it was a bit difficult, but the Santa and Mrs. Claus were really great and seemed very willing to keep trying to get a good picture.
Olivia was scared as I'm sure you can see in the picture... Little Tony and Amelia just wanted to keep looking at them so they were constantly turning around.  I had to get in the picture to keep Olivia calm enough to get a picture.
Of course we were an attraction to look at as well.  The triple stroller really piques the interest of most people because they've never seen anything like it (empty or full!).  I actually ran into a fellow CJMoM member there with her 4 month old twins.  They were so cute and tiny and it's hard to believe my three were ever that small!
Here are the pictures that we got that morning... 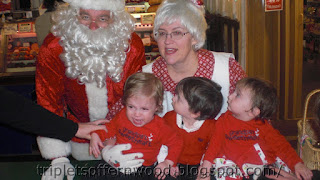 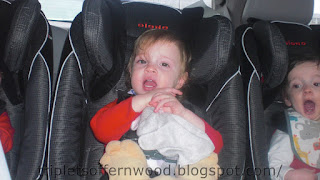 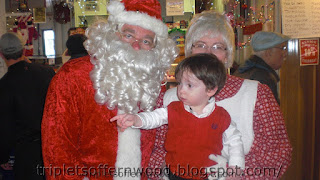 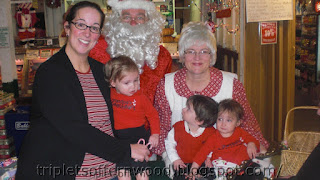 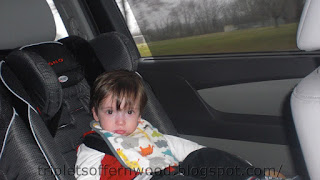 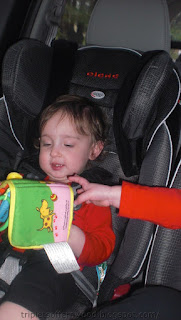 Posted by The Triplets of Fernwood at 11:29 PM No comments: