I'm putting together a 'Shutterfly' book of the babies from the past year.  I figure it's a nice gift to the grandparents for either Christmas or a whenever gift and also one for myself.  I got the idea because I received a code for a free book from Pampers for their birthday.  Then I got another code after entering in some My Coke Rewards!  After that one, I made Tony sign up and enter in some codes to get another one.  I knew there was a reason I save all these things - pampers points, coke points etc.!  I've also given some coke points to a co-worker on medical leave with not much to do and my sister who I know loves shutterfly.  I feel I should also add here that I save the old losing scratch off lottery tickets and have them saved for me so I can enter them online and hopefully someday win a million bucks in the 2nd chance drawing!  I think this is why I'm so tired - I somehow find the time to do all these things, but then don't get to bed at a reasonable hour and why some of these posts likely don't make sense or change subject within the same sentence...
So about the book - I have 20 pages to fill and I was originally going to pick one picture from each month plus a few others - 8 to be exact  - but it's so hard to choose!  There are so many cute pictures of them from each month that I've basically got 2 pages per month, but obviously that math doesn't add up.  I'm not done, but I try to work on it each day/night so I can finish before the end of the month - when the Pampers code expires!  I better hurry.  The last time I did this, I tried ordering just before midnight when the code was to expire and it said it was already too late.  I contacted them and they gave me a new one thankfully, but don't want to cut it that close again.

One last thing before I retire for the night - the babies and I did our first art project.  I did have some help from Melanie and Beth though.  I was feeling crafty the other day and thought of making our thank you cards from the babies birthday.  Yes, that is correct, I still have not gotten around to doing thank you cards from their birthday a few weeks ago.  Hey, I have an excuse, right?  I have triplets!  So I found some ideas online about making handprint animals.  So I got some washable paint and stamped each baby's hand and pressed it to some paper.  I was originally going to make each one individually, but realized quickly that that idea was way too ambitious.  I got Olivia's hand print on the 2nd attempt and hers definitely looks the best.  Amelia's was next and hers came out pretty good on the first try.  Little Tony had about 6-7 attempts and I think I have something I can use.  He had a difficult time keeping his fingers separated so it just ended up looking like a blob of paint on the paper.  So now I have each of their hands, but now need to create the rest of the animal.  Hopefully within a day or two I'll have the finished product to share.  After that I was going to have Tony scan the original artwork and make copies for the Thank you notes.

I haven't posted in a while because I've been pretty tired lately and you'd think that I was getting to bed early cause I'm tired, but the reality is that I've been going to bed later and later - there's always something to do.  Lately, my day starts around 7am - taking a shower and getting ready for work while I change diapers.  I wake T up and he gets bottles ready.  For a while now, Olivia has been drinking whole milk - no formula and will only drink from a sippy cup.  Little T has been getting more and more whole milk mixed with his formula.  He's currently drinking 4oz of milk with 2oz of formula.  Amelia is currently drinking about half and half.  Olivia doesn't like to be held while she's drinking, so we usually take her downstairs and she sits/stands in the exersaucer and drinks her bottle.  Oh and did I mention that she gets either strawberry or chocolate milk?  Yeah, this was the pediatrician's idea to get her to drink it.  At one point, she wouldn't drink the formula or the milk so that's how we've gotten her to drink the milk.  We could probably wean her off the flavored stuff, but we find that she won't drink the vitamins that we used to mix in with the formula - so we keep mixing a little in.  Amelia and little T still like to be held while they drink and truthfully, I'm happy to do it.  I don't get to hold them that much.
Around 8:15, I'm trying to get out the door, but it's more like 8:30am and I'm usually about 10 minutes late for work.  I'm so lucky to work for a great company and have a great supervisor.  I know she doesn't know what it's like to have triplets - not alot of people do but she completely understands what it's like to have family commitments and I'm grateful.  I usually end up staying a few minutes later to make up the time.  I leave work around 5:45pm and get home around 6:30.  I'll usually pack up the trio in our new choo choo wagon and take them for a walk.  They really seem to like it and there's even a space for their sippy cups!  They usually eat dinner around 7:30pm and usually get to bed around 8:30pm, unless it's bath night.  We do baths every other night, but sometimes they could really use a nightly bath, but it would just take too long.  After that, we usually sit down to eat something and then starts the cleaning up and finishing up anything else like laundry, dishes, etc.

Now for a little more about Amelia.  She's usually a happy little baby, but she lets you know if she doesn't want to be left alone.  She's just started walking within the past week :)  She can take 6-7 steps before falling down, and sometimes she seems so determined to keep up with her sister.  She's been doing really well with the regular milk and even eating yogurt without any negative effects.  We were pretty worried to make the change because her 'allergy', but so far so good.  She's been a really good eater lately too.  She seems to really like kielbasa - she couldn't get enough the other night!  She's gotten her 5th tooth (on top), loves all dogs she sees and sucks her thumb to lull herself to sleep.  She continues to be a great sleeper at night and at nap time.

Little Tony seems to be doing well with regular milk as well, but doesn't seem to eat as much as his sisters.  I'm not sure if he gets tired of feeding himself or chewing, he's seems the most content to be spoon fed, and at this point is the slowest eater.  Maybe he's just savoring every bite!  He is a pretty fast crawler and has even attempted climbing the stairs a few times.  He too has gotten his 5th tooth on the top and is the most laid back baby.  He's adorable to watch in the choo choo wagon.  He just leans back with his sippy cup of water is chills.  He's still my most cuddly baby, but lately, when he buries his head into my shoulder, he'll bite me and believe me - it hurts.  Hard to believe that it could hurt that badly with only 5 teeth, but it does!  Little man is probably our worst sleeper.  He usually is the last one to fall asleep and is the one that wakes up in the middle of the night.  He's spent many a night in our bed in between T & I.  We thought for a while that he just wasn't eating enough at dinner so he needed something more because we'd offer him a bottle and he'd chug it down, but the pedi said not to give him formula/milk in the night - only water.  He still takes a pacifier at night and nap time.

Olivia, who was my smallest baby at birth is now my biggest!  At their 12 month pedi appointment, she weighed in at (22lbs) - almost a whole pound more than Tony and almost 4 lbs more than Amelia.  She's obviously a good eater, (with the exception of the past few days - they're all a little congested - either from just being at the doctor's office or because of the vaccines they got.)  She's my most independent baby and walks really well now and climbs the stairs routinely.  I've seen her step up the stairs - not just crawl up them!  No new teeth for miss O, but she continues to drool like a faucet.  She constantly needs a bib, but doesn't like to have them on and will pull them off - especially to say she's done eating.  Olivia also takes a pacifier at night and nap time - she's a pretty good sleeper - and not always the first one up in the mornings like she used to be.

We've had a few successful outings - the other day to the Skylark Diner in Edison.  It was a very successful breakfast and we're finally breaking in the inglesina seats that we bought even before the babies were born.
Here are a few pictures... 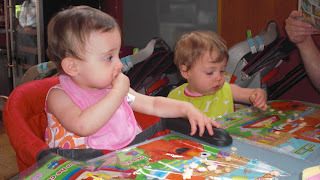 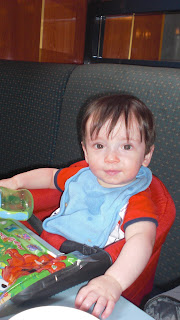 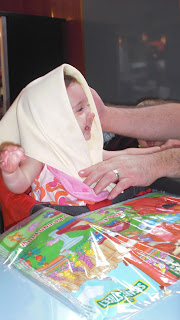 The weekend before, one of Tony's old work friends came over with her family and had dinner with us.  We had a nice time and I loved seeing her older kids and her baby interact with my three.  So cute.  We almost had a sleepover - because her older three kids wanted to sleep with the babies in their cribs!  They were so entertaining.  Each had their own favorite baby! 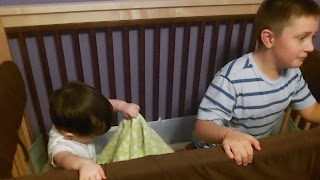 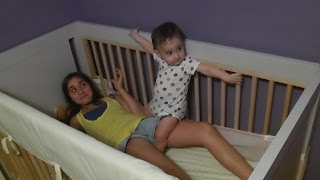 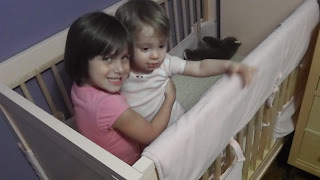 Posted by The Triplets of Fernwood at 12:04 AM No comments:

I started this post on their actual birthday of August 7, but wasn't able to post it before the clock struck twelve.  Oh well, it's the story of my life this past year.  I just can't seem to get my act together.  So for now, I'd just like to post a few pictures of their party that we had the previous weekend.  A good time was had by all (as far as I know).

Posted by The Triplets of Fernwood at 12:00 AM No comments: