This month has been flying by.  Everyone is finally better.  I actually hung onto it the longest and for a while there I thought the babies were going to get a second round, but it was merely teething.

During my last doctor's appointment, we were discussing a whole bunch of issues, reviewed my bloodwork, etc. including my need to see an eye doctor for a check up and a gynecologist since I haven't been since I had the babies and they're going to be 20 months pretty soon.  I did try and go for a check up a while ago, but once I got there and realized that I mostly likely was going to wait for over an hour past my appointment time, I decided my time was too valuable and left vowing that I wouldn't return.  I was pretty mad that day.   So the doctor ended up asking me if I'm planning on having my more children, which up until recently, my answer has always been no.  Lately, I'm feeling the itch to be pregnant.  I think it's the combination of  a couple things - like being around people that are pregnant and wanting to experience that again.  I have a mostly positive recollection of my pregnancy (I think I may be blocking out the bad).  Part of me wants to know if I could get pregnant on my own (without the help of fertility drugs/intervention) and part of me wants to know if I'd have another set of multiples.  At this point, we're not trying to have any more children, but we're not, not trying either.  The way I left it with the doctor was - if it happens, it happens, even though I know financially, it wouldn't be the best idea for our family.

I'm sure there are a bunch of other things that I should be catching up on, but I just can't seem to remember right now.  I've taken a ton of pictures over the past few weeks - some good, but not all.  I have really bad luck with cameras and lately, the one I have doesn't seem to capture movement very well.  Everything comes out blurry and believe me, it's not easy to get them to stand still. 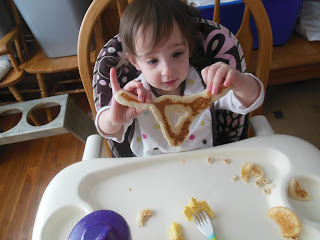 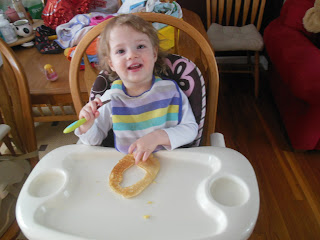 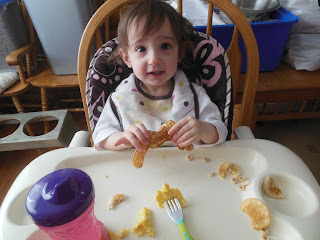 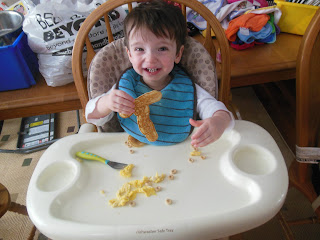 The weather has been getting a little nicer during the day - not so cold.  So we decided to let the kids play around in the back yard for a little bit.  We got them all bundled up in some older coats and shoes because the backyard is a bit muddy.  They had fun despite only being out for about 20 minutes - it was colder than anticipated - just running around.  We did open a new toy for outside that they got at Christmas time - a play lawn mower.  They really loved it! 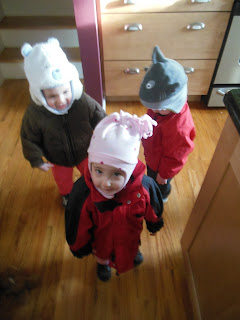 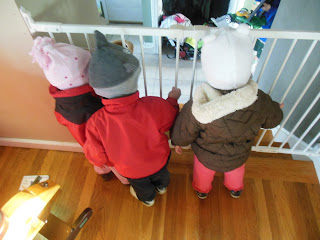 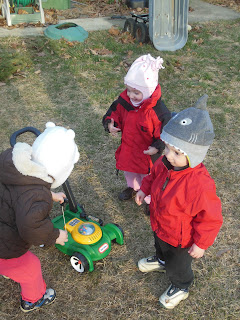 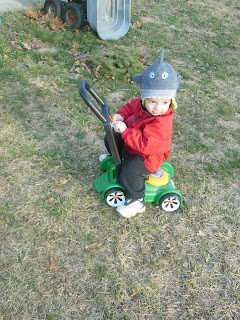 In other news, we got a new microwave.  The one we had kept turning itself off after being on for 2 seconds and the only way to get it back on was to reset it and enter the date and time.  This would/could happen about 5 times in a row before actually staying on.  It became a real annoyance - trying to heat something up for 30 seconds and it taking 5 minutes.  So we had looked around and decided on getting a microwave/convection oven from the appliance place downtown.  Tony installed it and has been a baking maniac ever since.  He's made cupcakes, soda bread, muffins, crackers and cookies!   He likes it more because it doesn't heat up the whole house like the oven would.  This should come in really handy when we have to bake alot of things for the kids and around the holidays!  So we had the pretty large box that the microwave came in and of course that's what they ended up playing with!  I cut a few holes/doors for them to peek through and they had a blast! 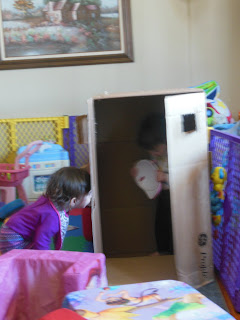 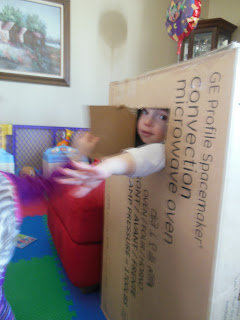 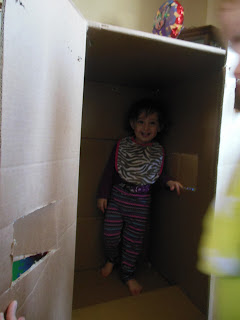 Posted by The Triplets of Fernwood at 12:26 AM No comments:

On the mend (finally)

Since 'that' weekend spent collecting germs, we've had a few rough days and nights with alot of runny snotty noses and coughing.  All of the babies are on the mend and so is Tony, but I, on the other hand seem to be having the most difficult time shaking the sickness off.  I've been to see my doctor on two occasions and have taken several days off of work.  (I'm so glad I still have unlimited sick time.)  On the first trip there, I was told I had bronchitis and given antibiotics and steriods.  After a few days and not getting any better, I went again and was told that I could possibly have pneumonia or even mono!  Great!  I went today for a chest x-ray and blood work to either confirm or rule out either of these diagnoses.  My supervisor at work is really awesome and understanding and let me know that I don't need to be a martyr and keep coming to work with pneumonia - it's ok to take another day.  The problem with taking another day off is that I feel like I'd actually work harder being at home with the babies.  She also let me know that if I continue to come to work sick - she'll expect no less in the future - even if I've lost a limb or something like that.

Last weekend, my MoM's club had their annual flea market/sale.  I had been gearing up for it for a few weeks - going through clothes and other items that we no longer use/need.  I was going to skip it because I was feeling really crappy, but Tony stepped in and saved the day - or rather the sale!  We arranged for Mel to come over early in the morning and Tony and I packed up both cars with all the stuff that we were going to attempt to sell, drove the 40 minutes to Hamilton and started unpacking the stuff.  Luckily, there were several people from the club that were there to lend a hand and cart all of the stuff from the car into the library.  The place was already packed and trying to organize all of the things seemed like a daunting task, but Tony took it all in stride and started making chit-chat with others there and before we knew it, people were digging through the boxes of clothes and filling the Halo Farm bags for $5.00 a bag for their little ones to wear.  I think overall, Tony sold about $175 worth of items and we divided up the proceeds and added it to their bank accounts.  Tony made one purchase there from a fellow MoM - a little scooter with a ball.  He saw it and thought of little Tony who seems to like to ride the lion (ride-on toy), but he likes to try to bounce on it - so this ride-on toy seemed perfect. 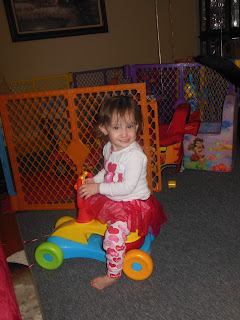 Here's a picture of Amelia on it...

Here's a few pictures from the week - I realized that I never got any good pictures of the girls in their Valentine's outfits so I took a few. 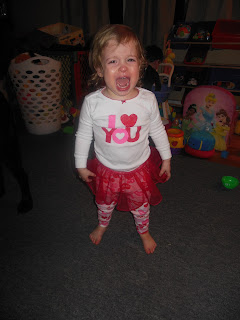 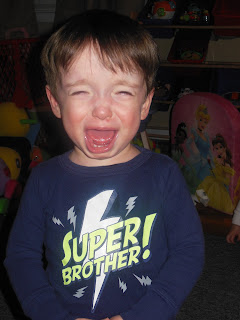 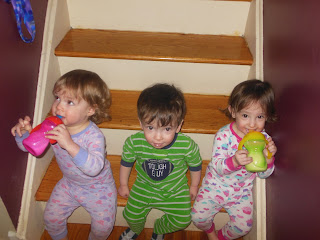 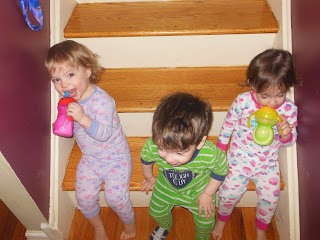 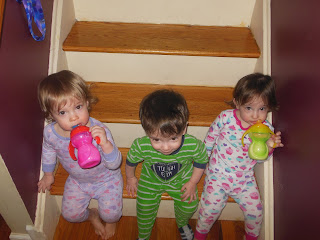 Anyways, today - well now yesterday 3/7/13 marked 19 months for my babies.  Tonight was the first time in several days that I can recall that they all seemed really happy and content.  Not whiny at all and ate their dinner well and happily played together in the bathtub without altercation.  It was really nice.  I ended up taking a long video of them in the bath tub, but don't want to take the time to load it now or for that matter have it on here for any pervs to see.  So unfortunately, I'll keep my nude baby pictures to myself.


Posted by The Triplets of Fernwood at 12:46 AM No comments: